Since GeoCities—as a stand-in for the past web, a representative for a certain visual style, or simply as a digital artifact and data set—becomes increasingly popular in mass culture and academia, and we at One Terabyte of Kilobyte Age feel partly responsible for it, there are four statements I’d like to make. Some more obvious than others, but all of them made in oder to restore historical justice.

Geocities is not a synonym for the web of the 1990’s. It was a big, well-known, important free hosting service, but it was not the only one. There were Tripod, Angelfire, Homestead, and others. But more importantly there were web sites outside of GeoCities (as well outside of other hosting services). I will not exaggerate and say now that GeoCities was a drop in the ocean, but let’s compare it with a lake in relation to the ocean of personal websites hosted elsewhere.

This fact maybe obvious for my generation and even for millennials, but Generation Z is at stake. They get to know about bright, crazy, cool GeoCities, as something like an app where people were active before Facebook or Instagram. But the point about the web before social networks or before Web 2.0 is not that you had a profile on GeoCities, but that you had a chance to build your cyber home outside of it, you could exist and grow outside of a centralized service.

Today many think that the Internat is the same as the WWW, and the WWW is equal to Facebook services. Critical digital culture circles make quite an effort to fight this delusion. Explaining that web history is more than the history of one company taking the place of another can help too.

2. GeoCities was not good

Nostalgia (netstalgia) is sweet but deceiving. Sometimes the vector of memory (“everything was better in the old days”) crosses the vector of social networks developments (obscuring, restricting, alienating, i.e. “there was more freedom in the old days”) at unexpected coordinates. This is how Myspace started to be remembered as a place where users were coders.1 This is how WordPress is pictured as a paradise for hyperlinks by Hossein Derakhshan in his otherwise highly important pro hyperlinks manifesto). Though the story was exactly the opposite! Historically Myspace was a big step away from readable source code, and it is exactly WordPress that should be blamed for disrespect to hypertext, as it filled the web with zombie links.2

There is a similar situation with Geocities. It was not a paradise for early web makers. It was not even a good web hosting service. It was free and not worse than others, that’s why webmasters endured the pain of clumsy page builders, interventions from commercial scripts being injected into their pages, accidental file deletions, etc… not to mention all the mess and further restrictions Yahoo brought when it acquired the service. You could tell the history of GeoCities as history of its users being angry, frustrated and moving out as soon as there was a chance. Actually one should. 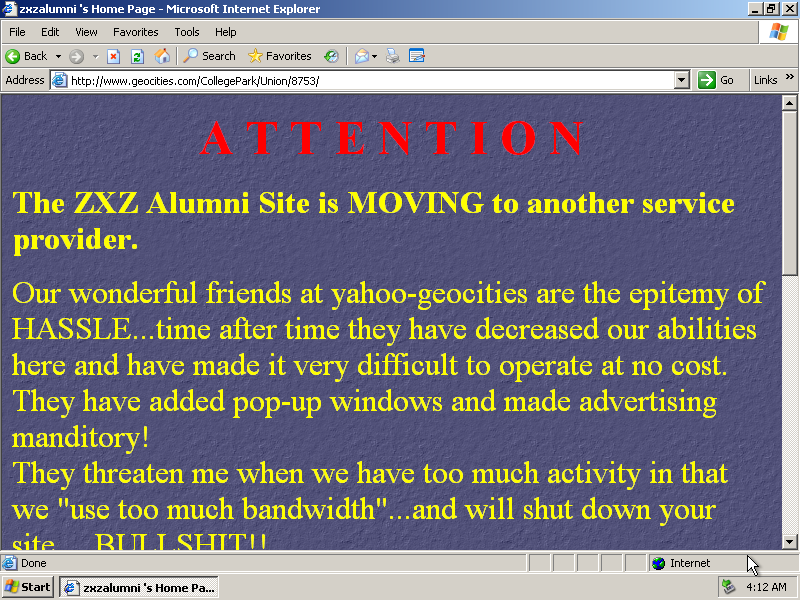 3. Geocities’ dominance in early web research and preservation is a historical accident

A charming video The early internet is breaking – here’s how the World Wide Web from the 90s on will be saved produced by Quartz is getting popular while I type, it is heart warming and moving, especially if you read the comments. Meghan McDonough and Marcie LaCerte were so kind to put One Terabyte of Kilobyte Age research and material and the center of their narration, that I feel bad to contradict their words. They say that our “work is inspired by Geocities.” It is not.

This must seem like a strange statement from the person who spend most of her time on GeoCities, so let me explain. Vernacular web research is not inspired by GeoCities, but since early 2011 it is channeled, shaped and dominated by the GeoCities. The deletion of GeoCities as an act of ignorance and belittlement towards the amateur web became a crucial point in writing the history of the amateur web.

We at the GeoCities Research Institute and many others (artists, academic, archivists) come up with GeoCities related findings, art works, and PhDs not because we were originally interested in GeoCities neighborhoods, intentions and expressions of their inhabitants, or David Bonnet’s vision of cyberspace. We all are on GeoCities because 10 years ago the Archive Team rescued the files and released them in a form that enables access with relative ease, for humans and algorithms alike.

I answered the question “What did peeman pee on” with examples from GeoCities not because I thought peeman.gif originated from the MotorCity neighborhood, and not because I believe it wasn’t popular outside of this particular hosting service. The reason was that these were the only web pages I could access. And my work at the Geocities Research Institute is facilitated but also guided by the logic of the interface Dragan built around a locally available digital artifact.

But this technical artifact is not the only manifestation of GeoCities today. The story of GeoCities’ demise and rescue, with a clear villain (Yahoo) and clear heroes (amateur users) made the site relevant in its afterlife. The fact that it was deleted and saved transformed it into an object of study and provided indulgence to make it a testing ground for all kinds of digital humanities practices, see for example Ian Milligan’s “distant reading” approach to the EnchantedForest neighborhood, discussed in his recent book “History in the age of abundance”.

For Milligan, the glorious afterlife story of Geocities is a reason to go there, for the Internet Archive it is a reason to stop there. Think of their GIFCities search engine project: Does it deliver GIFs only from GeoCities because these are all relevant GIFs the Internet Archive got from this period, or are they any more animated than the ones from independent free collections or the ones on AngelFire? Of course not. But the cultural status of GeoCities prevents the general public from asking: “why Geocities only?”, providing a boundary for the project.

The status and the aura of the deleted and resurrected GeoCities is also to be exploited in the art scene. Why everybody’s (and my own) favorite Cameron’s World is based on “text and images excavated from the buried neighborhoods of GeoCities”? Not because Cameron Askin was looking for remains of GeoCities, but because GeoCities’ remains happened to be the only ones with a crypt.

I don’t question the intentions and methods of people processing GeoCities data, and in no case want to downplay the value of the this data set. I am marking here an event in history that has become crucial for writing history, and am reminding about the power archives and an act of archiving can have.

4. GeoCities style is not GeoCities’s style

Having said that GeoCities was more hell than heaven, that the history of the amateur web could look different, and that the history of the early web should look different, I will now argue with myself and state that of course GeoCities did have certain cultural significance before Yahoo deleted it, before Archive Team rescued part of it, before our One Terabyte Of Kilobyte Age tumbler blog started to flood the web with GeoCities screenshots.

If that wouldn’t be true, the British web standards expert Bruce Lawson wouldn’t have called his CSS Zen Garden intervention GeoCities 1996 already in 20043, and writer and coder Mike Lacher would not call his tool Geocities-izer in 2010, and the app hosting service Divshot would maybe find another name for their Geo for Bootstrap theme in 2013.

And, first and foremostmost, Jason Scott wouldn’t have make a call to rescue GeoCities if the service didn’t already have a strong presence in the minds of non GeoCities users.

Already in 1997 in web design cicles “Geocities” was a swear word. I wish I would have a proof, but none of 80 web manuals and web design books from that period in my collection dared to even mention Geocities, so you will have to take my word for it.

The term “GeoCities” was refering to not professionally made websites, which at that time meant eclectic, put together from elements found in free collections or on other web sites, as opposed to preparing a coherent 800×600 block in Photoshop, slicing it into smaller pictures to provide clickable surfaces, and putting them back together in HTML.

So “GeoCities” was and still used today as a name for HTML eclecticism, the visual style well imitated by the examples above.

What we miss when giving away the term GeoCities to imaginary or remembered styles of the 1990s web is the possibility to see that GeoCities pages had their own style that can be distinguished from the pages made elsewhere.

The true/original GeoCities style was in the beginning heavily influenced by David Bohnett’s choices: he collected elements in the public clipart folders “flags” and “lines”, early GeoCities users could pick from when making their first pages. The structure of the sample page he created featured must-have “links to other sites on the Web.” 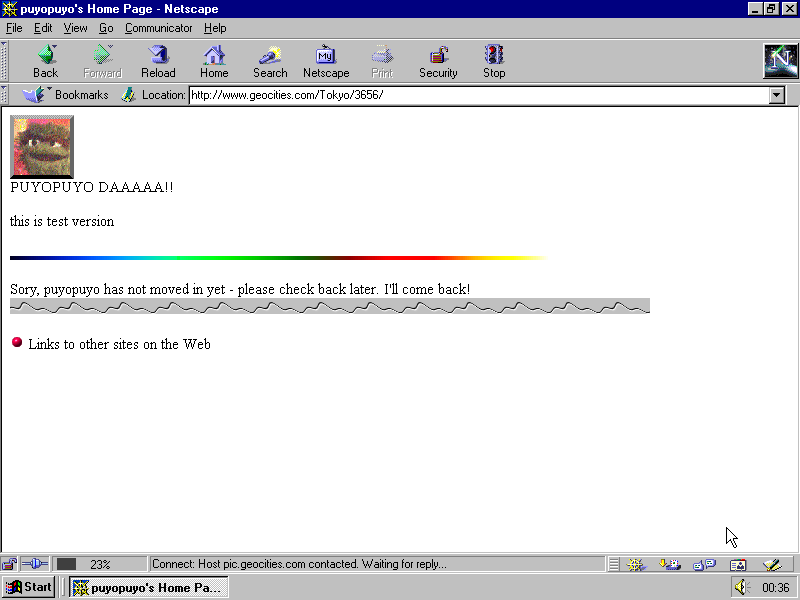 From 1998 on GeoCities pages could easily recognized by using layout and elements of Intel’s “page wizard”, an half-automated web page editor run as a brand partnership with GeoCities, that promoted its very unique vision of how a modern home in cyberspace should look. Since late 1999 by Yahoos failed attempts to bring order into style and narrative of homesteaders resulted in misused templates and their splinters scattered around the WWW. Beside these distinctive visuals, GeoCities also featured very specific content: for example, excusing for pop ups or cursing about Yahoo.

Why is it important to distinguish GeoCities’s and GeoCities styles? Apart from training the eyes of vernacular web researchers, the challenge is to take a step beyond just visuals that could easily be imitated and re-purposed in different contexts, towards a serious understanding about the particular conditions in which various web dialects were formed, to move from looking at static artifacts to the realization of what it meant to make a web page.